Along The Ale & Spirits Trail

Beer is big in Santa Fe County. Craft breweries, tap rooms and an annual Hoptoberfest celebrating New Mexico’s hop growers make this the place to sip award-winning suds. Are spirits more your style? Savor an artisan distillery’s smooth gin flavored with local juniper berries and sage or a prickly pear-infused margarita. Live music, fantastic food, brewery tours and even horseshoes and Kan Jam are also on tap along our Ale & Spirits Trail, an elevated experience you won’t want to miss. Check out our Top Four Things to Do along the way.

Start your ale adventure at Santa Fe Brewing Co., New Mexico’s first and biggest craft beer brewery. Launched in 1988 with the prized Santa Fe Pale Ale, Santa Fe Brewing Co. today brews a dozen seasonal and year-round beers. See the magic at work on a weekly tour of the brewery facility, and then sip some samples to find your favorite ales. Don’t forget to pick up a six-pack or two to take with you. Like many other area breweries, the Santa Fe Brewing Co. grows its own hops on a small farm in Rinconada, near the banks of the Rio Grande. Maybe that’s the reason why the new 7K IPA has become New Mexico’s best-selling craft beer.

Enjoy a lot more than just craft beer while you’re here. The Bridge at Santa Fe Brewing—the brewery’s onsite venue— presents cool concerts by local and touring musicians and bands, surrounded by monstrous mountain views. The new Beer Hall at HQ serves beer, cider, wine and limited fare. There’s also a beer garden— a paradise of grass and trees where you can drink in nature’s beauty.

For a more intimate brewpub experience, head to Santa Fe Brewing Co.’s Eldorado Tap Room, off Highway 285 south of Santa Fe, in La Tienda. Choose from 14 taps, as well as wine and cider. Mingle with the locals and watch
football, soccer, tennis and more. In warm months, the patio is a popular place for people and dogs. Live music is often on tap, too.

Locals love to shop La Tienda, where the general store offers chic clothing, home decor and more. Grab a shot of espresso at the Coffeehouse, which also sells imported jewelry and textiles. Find sustenance at the authentic Thai Bistro—popular with locals. 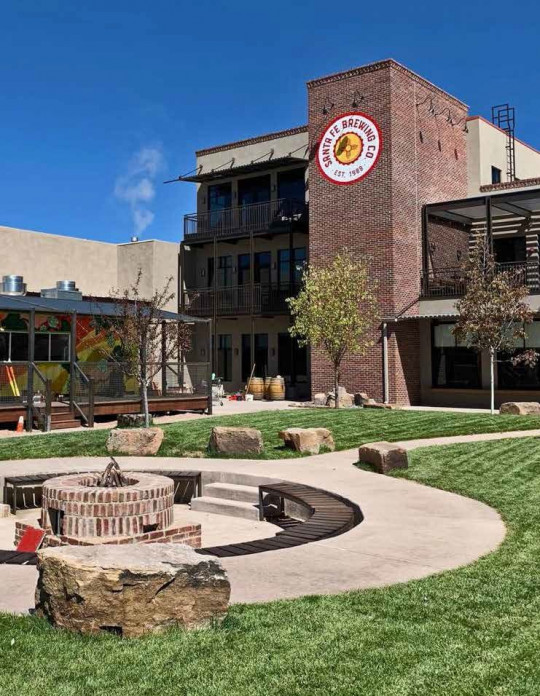 Beer by the Train Tracks

Just down the road, via hwy 285, lies Sleepy little Lamy, once a major railroad stop with a Harvey House hotel, a saloon and a Mission Revival-style train depot. Lamy is home to the Legal Tender Saloon and Eating House. Built in 1881, the historic building has been lovingly restored and now draws crowds the way the old saloon once did. The long oak bar gleams beneath glowing chandeliers, and a side dining room once used for poker games beckons. A seat on the patio gives you a view of Amtrak’s Southwest Chief, which pulls into the original depot across the street twice a day. Live music and friendly locals make this a place you cannot miss. 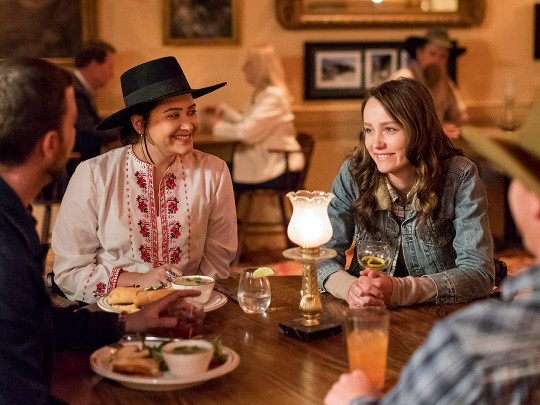 Sip New Mexico craft beer and savor foods from the region’s past at the annual New Mexico Beer and Food Festival: Panza Llena. It takes place outdoors at the fabulous living history museum, El Rancho de las Golondrinas, in mid-August. As the Spanish proverb in the title indicates, you’ll leave with a “Full Belly, Happy Heart.”

Beer and pizza were meant for each other and out on the Turquoise Trail, the boisterous Beer Creek Brewing Company serves both up right. What began as a backyard home-brewing project for friends grew into this popular brewpub in Lone Butte, serving killer beer and outrageous pizza, along with loads of other fare served in big portions. Signature pies include the Big Game, featuring wild game sausage, and the Bonanza, heavy on the meat and popular with green chile. Among the eight beers brewed here, the Porter is renowned, but the bestseller is the Coming Soon Pale Ale. One popular pairing you shouldn’t miss is the green chile cheesecake with a glass of Lizard Queen, an imperial blonde with an 8.4% ABV. Grab a seat inside, with inviting fireplaces, armchairs and lots of wood details, or sit out on the spacious patio and drink in the mountain views. No matter where you end up, you’ll enjoy live music and the friendly atmosphere of locals. Beer Creek also grows its own hops on Crossed Sabers Hops Co., a nearby four-acre farm, and hosts the Hoptoberfest, where nearly a dozen breweries pour 1,900 cups of 14 different beers. Beer Creek’s co-owner Rich Headley describes the area’s craft beer boom as a “Farm to Tap” movement and is thrilled to see the breweries collaborating. 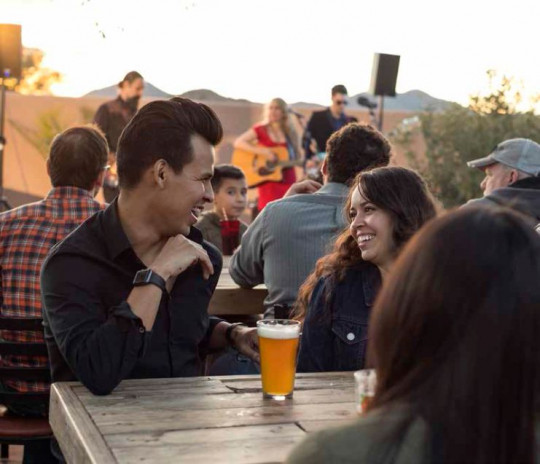 To create the Lizard Queen, Beer Creek collaborated with Tumbleroot Brewery and Distillery, which manages to produce both excellent craft beer and elegant artisan spirits. On top of that, Tumbleroot operates two venues—a brewing and distilling facility and a separate taproom and restaurant. Check out the intimate tasting room bar and bottle shop at 32 Bisbee Court, and sample Honey Hibiscus Wheat or Old School IPA while you watch the production process through picture windows. The ambiance here feels like a British pub, especially when you sip London Gin and play a game of darts. Tumbleroot’s taproom and restaurant at 2791 Agua Fria Street is a hot spot for all ages, with lots of places to hang out, whether you’re indoors or outside. Try an Irish Stout or a cocktail made with Botanical Gin infused with juniper and sage, and watch the kiddos at play in their fun-filled areas. Chat up the locals at a community table, toss some horseshoes or a throw a disc in the Kan Jam game. Add in regular live music concerts and karaoke nights, and you’ve got the perfect brewer’s blend for fun. Looking for lodging? Check into Rancho Gallina, a rustic ecoretreat on a historic ranch, just off the Turquoise Trail. Outfitted with solar power, EV chargers, geothermal heating/cooling and a cedar hot tub, this welcoming inn provides the perfect place to rest up before continuing your Santa Fe County Ale & Spirits Trail adventure. 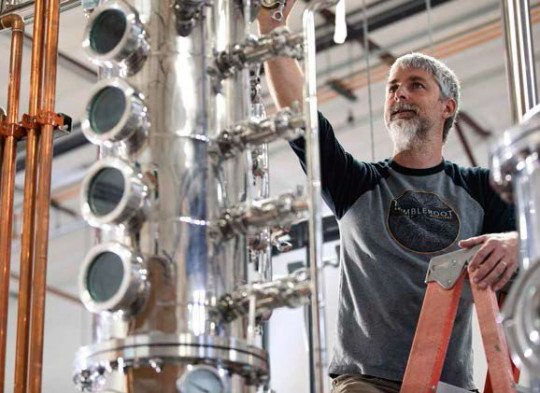 Forget Oktoberfest, we’ve got Hoptoberfest! This mid-October celebration pairs New Mexico craft brewers with hop farmers who create more than a dozen craft beers. You’ll get to sample them all on Beer Creek Brewing Company’s prime patio. Beer buffs, you won’t want to miss this bash.