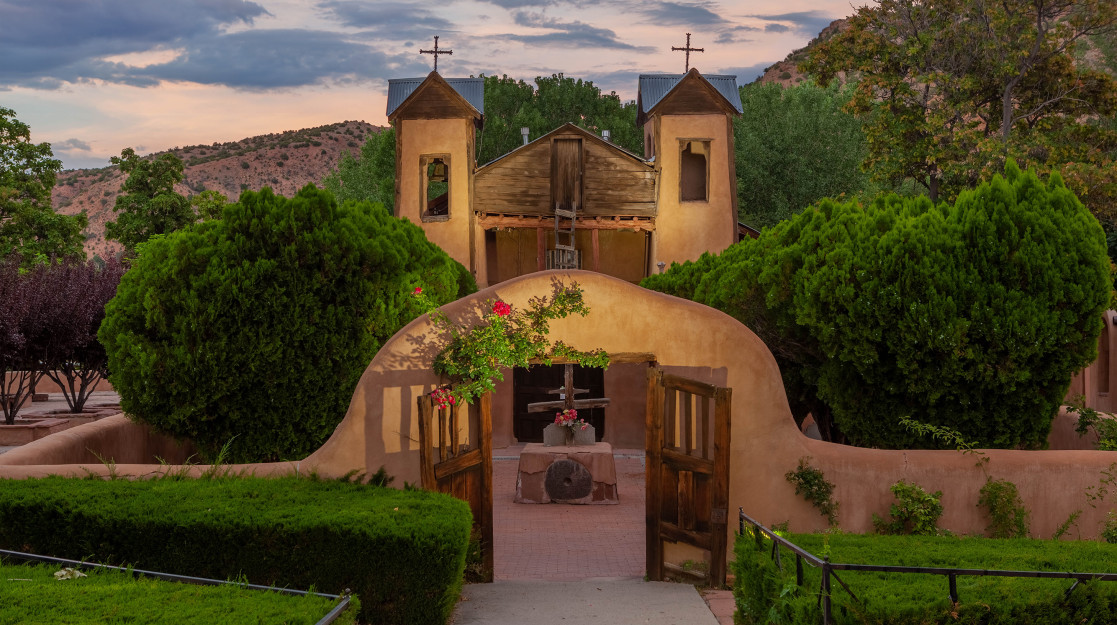 The Churches of Northern New Mexico

Built across the centuries, northern New Mexico's historic churches are architectural wonders and works of art, made of thick adobe walls, graceful arches and rustic spires. Whether modest or grand, these beautiful churches are filled with devotional art—bultos (carved wooden sculptures), retablos (painted wooden tablets ) reredos (altar screens) and other traditional works. A visit to these architectural gems, each a powerful expression that will lift your heart and touch your soul.

Because visiting hours and scheduled services can change, be sure to check with each location you plan to see for hours, tour info and other information.

The History of Chimayó

The historic village of Chimayó is home to the 19th-century adobe chapel and shrine, El Santuarió de  Chimayó. The chapel may be small, but it's known far and wide for the miraculous dirt in a well in a side room off the altar that many believe holds healing powers. The chapel displays an amazing variety of brightly painted devotional art. The faithful make an annual pilgrimage here during Holy Week. The well-preserved adobe church features towers with belfries, wooden doors, and an enclosed garden. Additionally, history lovers will appreciate its status as a National Historic Landmark, one of only 46 in New Mexico.

Chimayó's beloved Santo Niño de Atocha Chapel was constructed in 1856 to honor Santo Niño, or Holy Child, believed to be the manifestation of the child Jesus, who walked at night seeking those who needed his help. Now a modern Children’s Chapel, it houses a Santo Niño bulto surrounded by children’s shoes left as an offering to Santo Niño for his long journeys on foot. The modest church features an adobe exterior, wooden vigas and stone flooring on the interior.

Iglesia de San José, or St. Joseph's Church, overlooks the main street of the historic mining town, Los Cerrillos. The adobe church was built in 1922 to replace the church's first building, constructed in 1884 where the pastor's residence is now located. Los Cerrillos became a parish in 1939, served by many Franciscan Fathers, most notably Fray Angélico Chávez , a beloved poet who was pastor here from 1960 to 1964. The church is built in a Colonial Spanish style.

In the village of Galisteo, the stately Iglesia Nuestra Señora de Los Remedios Church (The Church of Our Lady of the Remedies) dates to 1884, when it was built as a reconstruction of a Spanish mission church that once occupied the same site. The church is named for the patroness whose image graced the battle standard of Diego de Vargas as he led the Spanish reconquest in 1692, following the Pueblo Revolt of 1680.

The single-story adobe church, Nuestra Señora de las Luz (Our Lady of Light), is a longtime favorite with artists, including photographer Ansel Adams. Built between 1880 and 1881 by the parishioners of nearby Cañoncito in Territorial-style architecture, the church is listed on the National Register of Historic Places. It sits on the old Santa Fe Trail and has long been the heart of the  Cañoncito community.

Located 13 miles south of Santa Fe, north of the I-25 frontage road

Lamy's most glorious accomplishment, the Cathedral Basilica of St. Francis of Assisi, lies in the heart of historic Santa Fe. Arriving in 1850, Lamy found Santa Fe's existing adobe church too modest for the new seat of the Archdiocese. He envisioned a regal Romanesque Revival-style cathedral and summoned French architects and Italian stonemasons to build it, with Corinthian columns and stained glass windows imported from France. Construction began in 1869 but the funds ran out before the spires were completed. Dedicated in 1887, the cathedral was elevated to a basilica by Pope Benedict XVI in 2005.

Completed in 1878, the Loretto Chapel was designed after the Gothic-Revival masterpiece Sainte-Chapelle, Lamy's favorite chapel in Paris. Ornate stained glass windows and religious art adorn this architectural gem, but it's the Miraculous Staircase that transfixes visitors. According to legend, a staircase was needed to access the choir loft. In response to the nun's prayers, a carpenter appeared, perhaps St. Joseph himself, the patron saint of carpenters, and built this spiral wooden wonder of two 360-degree turns with no visible means of support.

San Miguel Chapel is considered by many people to be the oldest church in the country. Built between 1610 and 1628 in El Barrio de Analco National Register Historic District, this Spanish Colonial mission features five-foot thick adobe walls and heavy vigas. The interior displays New Mexico's oldest reredos, created in 1798. Significantly damaged and reconstructed over the centuries, the church is one of the country's most carefully preserved adobe buildings.

Santuario de Guadalupe Church is the country's oldest Catholic shrine dedicated to Our Lady of Guadalupe. Completed by 1796, the adobe church's interior features a choir loft brought from the military chapel, La Castrense, which was built in 1760 on the south side of the Santa Fe Plaza and demolished in 1859. This historical church is also listed on the New Mexico State Register of Cultural Properties.

Cristo Rey Church was designed in the Pueblo Revival style by celebrated Santa Fe architect John Gaw Meem, who was influenced by New Mexico's historic Spanish missions. Built between 1939 and 1940, the church is home to an impressive stone reredos, commissioned in 1760. Carved with angels, saints, and other devotional imagery the reredos resembles carvings found in churches in Mexico and southern Europe.

Located at the corner of Cristo Rey and Canyon Road