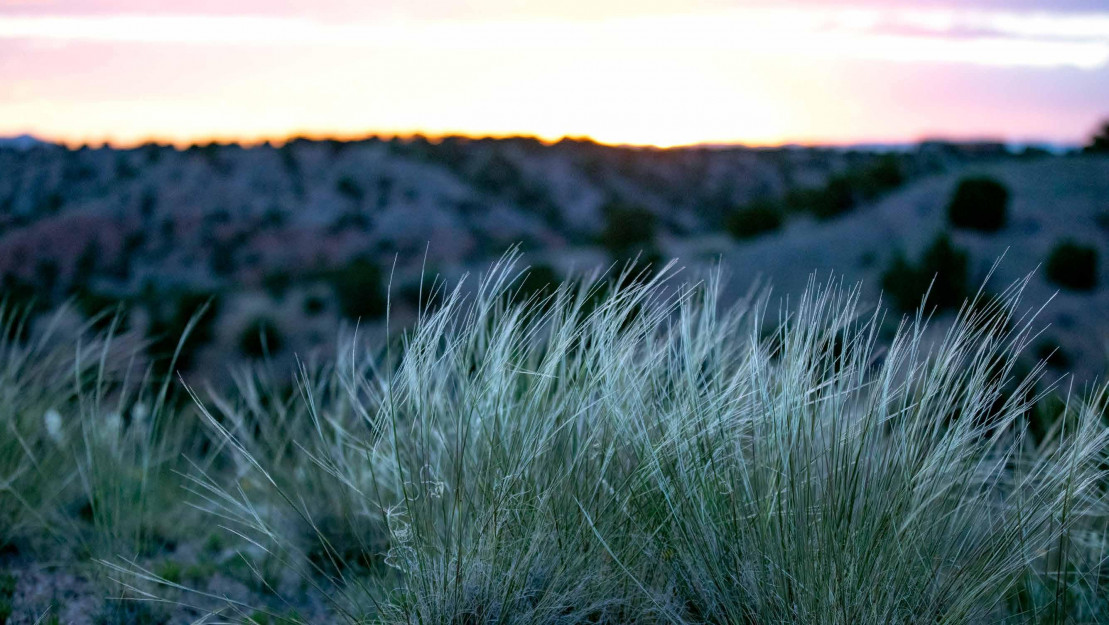 Hiking meets history in this spectacularly scenic southeastern corner of Santa Fe County. Walk through Native American ruins and Civil War battlefields. Play to your heart’s content in a wonder of wilderness. Hang out in an historic railroad town that’s back on track with new life. Check out our recommendations for the Top 5 Things to Do on this  outdoor adventure.

Grab your hiking or biking gear and head out to the Galisteo Basin Preserve. Almost 30 miles of hiking, biking and horseback riding trails are surrounded by nearly 10,000 acres of Savannah grasslands, winding arroyos, sandstone formations and other pristine wilderness. Once sprawling ranch lands, the preserve is under the stewardship of a nonprofit, conservation-based community development organization devoted to environmental protection, habitat restoration, low-impact development and recreation access. This means you can explore some of the most majestic beauty in the region. Be prepared to be awestruck. 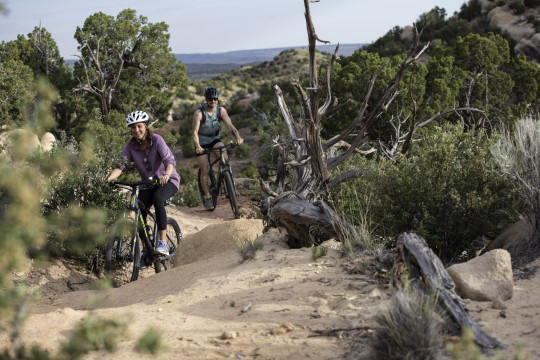 Uncover the area’s captivating history in Pecos National Historical Park, 25 miles southeast of Santa Fe. This 6,500-acre treasure is the perfect place to explore New Mexico’s fascinating history. Start by taking the trail to haunting ancient ruins of one of the largest pueblos in the Southwest and the remnants of an 18th-century Spanish mission church, evidence of the Spanish who once ruled this region for several centuries. The Santa Fe Trail passed through here, and ruts are still visible. Take the tour of a stylish dude ranch visited by Will Rogers and Charles Lindbergh that became Forked Lightning Ranch, owned by Oscar-winning actress Greer Garson and her husband, Texas oil magnate Buddy Fogelson. Opulent parties held here drew Hollywood celebrities and other luminaries of the past.

Not many people know that a pivotal battle in the American Civil War was fought between Union and Confederate soldiers in New Mexico in 1862. The Battle of Glorieta Pass dashed the Confederacy’s hopes of preventing the Union from controlling the West and all its riches. On the 2.35- mile Glorieta Battlefield hiking trail, see where soldiers crouched in winter snow on Artillery Hill, or sought medical assistance at Pigeon’s Ranch, which served as a field hospital. Interpretive trail signs show you all of this and more. Before you go, get the trail’s access code from the Visitor Center, which is 7.5 miles from the trailhead.

Interact with history during the park’s annual Civil War Encampment, a free event held around the anniversary dates of the battle (March 26–28). Meet living history players dressed as soldiers and other historical figures, ride in a horse-drawn wagon, see black powder demonstrations and hear lectures about life in New Mexico during the Civil War years.

For a magical experience, visit the park in mid-December for the Farolito Walk. This treasured tradition is popular with locals and visitors alike. Walk a one-mile trail to the Spanish mission church and pueblo ruins. The whole way, the trail is illuminated by more than 3,500 farolitos, paper bags filled with sand and a glowing candle. It’s a gorgeous sight. Be sure to dress warmly. 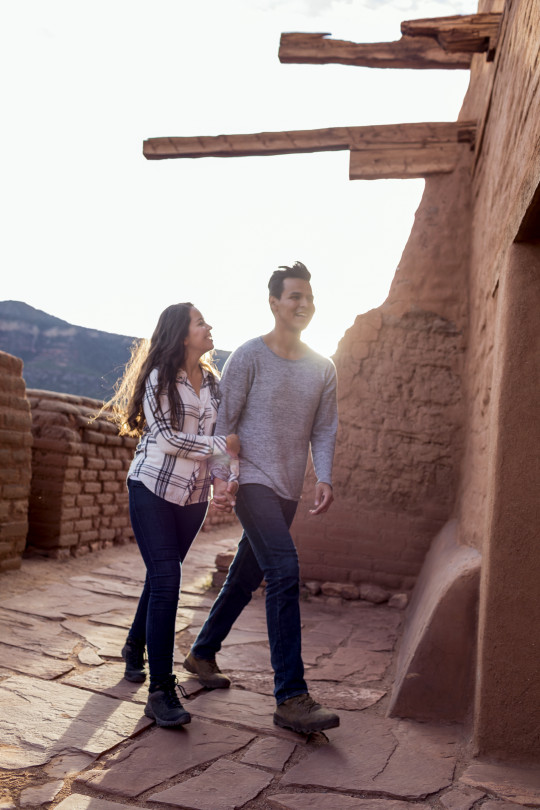 Stop by the village of Galisteo, founded in 1816. Ancestral Puebloan people once dwelled here, neighbors of some 15,000 Southern Tewa Indians who lived on separate pueblos in the Galisteo Basin. Today, sleepy Galisteo is home to acclaimed artists, authors and other noteworthy residents. It’s also played a backdrop in hit films such as “Thor” and “Legion.”

Pick up a picnic for your outdoor adventures during a stop in Eldorado, a community with some great eateries serving Thai and Latin grill cuisine, as well as creative pizza. Cafe Fina, housed in a historic remodeled gas station, is known for modern American comfort food such as chipotle shrimp corncakes and green chile cheeseburgers. Drop in to Arable for dinner or weekend brunch. The farm-to-table fare—shrimp & grits, weekly taco specials, and grass-fed hangar steak—will leave you full and feeling good. You may have caught Arable on Guy Fieri’s Food Network show, “Diners, Drive-Ins and Dives” raving about the bison gravy poutine. It sure is worthy of a TV cameo. 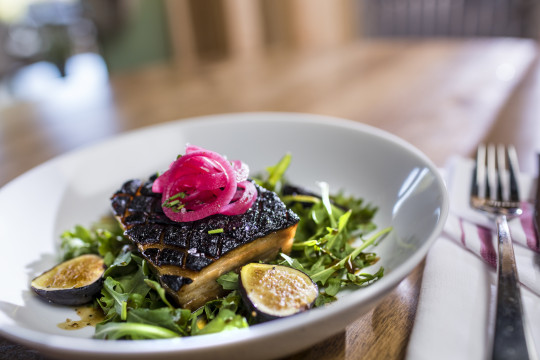 Sleepy little Lamy was once a major railroad stop with a Harvey House hotel, a saloon and a Mission Revival-style train depot. The town was bustling with passengers from the Atchison, Topeka & Santa Fe Railroad who rode a spur line into Santa Fe. But the trains gave way to automobiles, and Lamy lost its luster. Today, the town is waking up, and that’s partly due to the Legal Tender Saloon and Eating House. Built in 1881, the historic building has been lovingly restored and now draws crowds the way the old saloon once did. The long oak bar gleams beneath glowing chandeliers, and a side dining room once used for poker games beckons. A seat on the patio gives you a view of Amtrak’s Southwest Chief, which pulls into the original depot across the street twice a day. Live music and friendly locals and visitors make this a place you cannot miss. The food is great, too—modern twists on American classics reminiscent of Lamy’s railroad days and the Harvey House cuisine. The pecan smoked ribs are mighty fine, and the poached wild-caught shrimp roll will please your palate.

The historic Lamy Depot across the street was built by the AT&SF in 1909. Step inside and you can imagine what Lamy was like as a thriving railroad town, with a Fred Harvey Hotel, El Ortiz, built in 1883 and later demolished. By today’s standards, the hotel was boutique—intimate yet elegant, styled after a Mexican nobleman’s residence. The town also offered housing for railroad employees and storage for the locomotives. Santa Fe was originally on track to be the AT&SF’s destination, but the area’s mountainous terrain made it impossible to build a main track into the capital of the Territory of New Mexico. When the AT&SF arrived in February, 1879, it pulled into Lamy instead, making this tiny town part of railroad history. 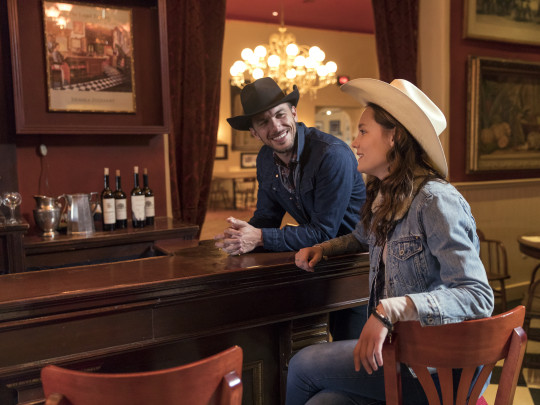 The enchanting Bobcat Inn is the place to stay when you’re in this neck of the woods. Located on 10 acres with walking trails and a courtyard with a koi pond and waterfall, this charming bed and breakfast tucked into the countryside is ideal for your getaway to paradise. Book the Estrella room, with 360-degree views, and you’ll be awed by the spectacular star gazing from your room, thanks to Santa Fe County’s dark skies. 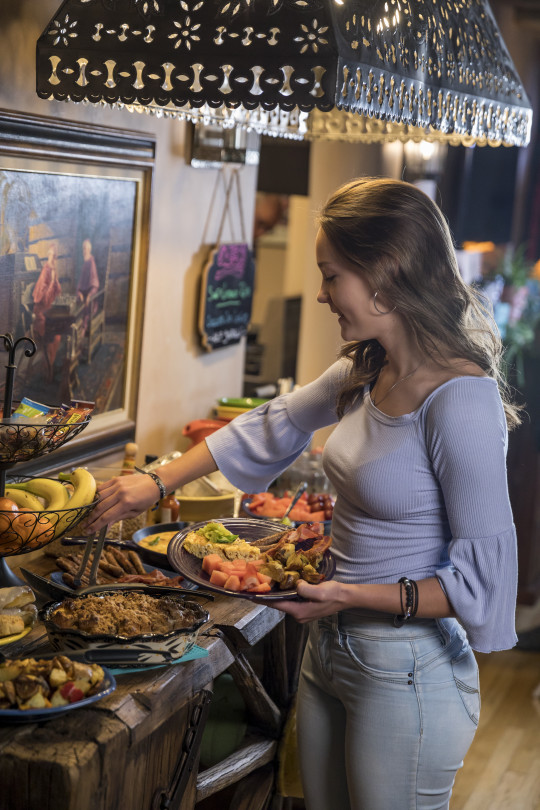 The annual Galisteo Studio Tour draws locals and visitors alike to meet artists of every genre. You can purchase paintings, sculpture, jewelry, wearable art, micaceous clay pottery and so many other treasures. The October tour also showcases glorious peak foliage, with golden cottonwoods set against a brilliant turquoise sky.